I won’t lie: I’ve been looking forward to Tuesday, since, well, just after this same Tuesday last year.

I’m sitting on my front porch writing this. A tall guy and his girlfriend just went by, looking smart in black and red. The girlfriend eyes my cherry tomatoes with a smile. Now a woman with an aging golden lab, both sporting blond locks negotiating with gray. Kids are playing in the schoolyard across the street, parents gamely chasing errant balls. A guy is climbing the hill on a road bike, lycra decorated in Nascar fashion. Here comes a long-hair in a leather baseball cap on a skateboard.

I don’t know who they are. I should. They’re my neighbors, give or take a block.

That’s what makes Seattle Night Out so wonderful: I can know them! 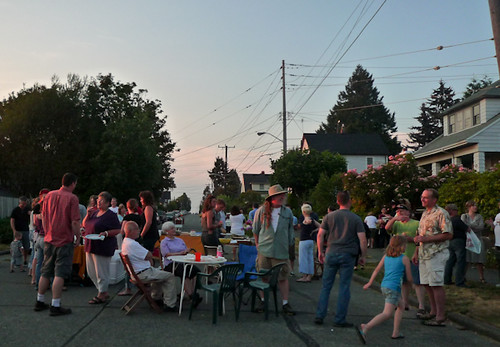 On Tuesday, August 6th, in neighborhoods all across Seattle, barricades will be closing off the streets, picnic tables set up where cars where cars usually tread, deck chairs pulled from around back, casseroles heated and coolers iced. Neighbors will be gathering and getting to know each other.

According to the SPD:

“Night Out” is a national Crime Prevention event. It is designed to heighten crime prevention awareness, increase neighborhood support in anti-crime efforts, and unite our communities. It is a great chance to learn about crime prevention, while also celebrating your community and spending time with your neighbors.

For the past several years, I’ve been hopping on my bike, most years with my son Zev in tow, and bopping street-to-street between Night Out gatherings, meeting people and just bathing in the sweet flow of community.

Look, I get where the SPD is coming from, and I think it’s true that it can contribute to “crime prevention awareness”, but I’ve got to say, what I feel when I’m out there isn’t about fear or fighting fear: it’s more like drinking a Normal Rockwell smoothie with pancakes and bacon. It’s neighbors finally meeting the person whose lived two doors down for the past five years.

And tomorrow, when they see each other, it’s going to be different. And the next day, and the day after that.

If you’ve got your Night Out party set, enjoy! If, however, your street hasn’t organized a Night Out gathering (and that’s about 3 out of 4, based on my experience), may I suggest one of the following:

Several Wallingford businesses are holding celebrations that night, as well:

To celebrate NIGHT OUT SEATTLE, the Wallingford Center Merchants Association is hosting an evening of fun and family entertainment for our neighbors on Tuesday, August 6 from 5:30-8:00 pm. Join us outside on our Northwest Plaza!

That’s at Wallingford Center, obviously. Then, a short hop down 45th at SeaMonster Lounge they’ll be celebrating:

… with live music by Leif Totusekand his Candela Band playing Rhumba Calypso …. Food, Games, and Adult Drinks will also be provided courtesy of Seamonster Lounge; but please feel free to donate (proceeds benefit this years Goddess Festival that will be raising money for the Wallingford Community Senior Center on September 14th). And always feel free to add to the festivities with your own dish or drink. After Leif Totusek stick around for MCTUFF at Seamonster at 10pm.

So there ya go: the weather will be beautiful, your neighbors will be out on the streets in force. Go meet them!