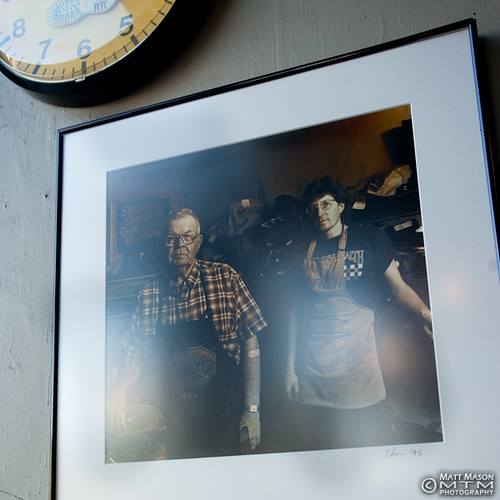 never had the chance to attend high school, yet he built a family-operated Seattle shoe repair business that continues to thrive today—more than 80 years later. And, it’s still in the family.

Swedish-born George Sr. left school as a kid to work in a shoe factory due to Sweden’s then famine-stricken economy. Later into his teens, he immigrated to the U.S., where he gained citizenship and was drafted into World War I—landing him in Fort Lewis, repairing military boots. Following his service, he began working in various downtown Seattle shoe repair shops. By 1928, George Sr. owned his own store on 6th and Union: “Progressive Shoe Repair.” Twenty years later, he moved his business to the same Wallingford storefront Swanson’s Shoe Repair is housed in today.

When George Sr. retired in 1960 one of his sons, George Jr., who had grown up working in his father’s shop, took the business over. For 30 years, George Jr. ran the store, his wife occasionally managing the counter on Saturdays, but mostly raising their four children, all of whom worked in the shop at some time.

Upon George Jr.’s retirement, the store was once again passed along to the next generation—this time to his son Dan. Like his own father (who worked in the shop until his final days), George Jr. never really retired, cutting his original twelve-hour-workday down to just seven. Dan’s sister, Patty Mayhle came on board in 2004, following their father’s passing. She still works alongside her brother today.

Dan never actually planned to take over his father’s business. “I decided this wasn’t such a bad gig,” he says. “I never went to college—none of us did.” Dan says his father pointed out that his son already knew the trade, as he had started working at the store as a teenager and was already working there part-time. So at 30, Dan became his father’s boss.

Shortly after their father’s passing, Patty quit her job of 23 years and brought Dan her resume. She recalls telling him, “If you don’t hire me, I’ll tell Mom. Or, I’ll beat you up.” Some people might cringe at the thought of working side-by-side with their sibling for 10-hours-a-day, five-days-a-week. The two agree that it’s great, though and beyond their playful banter, they’re quick to praise each other’s work. 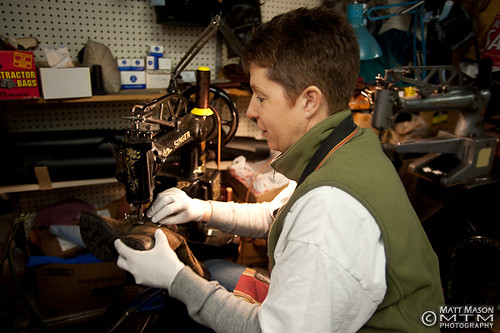 is in her fitting work, meaning a good portion of her day is spent in front of a sewing machine. Dan says his sister’s taken it to another level. “She’ll take a $900 pair of boots and fit it to your leg…I could never just cut into a boot like that,” he says. “Women call in asking for Patty, and it’s like I’m not even here now,” Dan jokes.

Likening her brother’s relaxed demeanor to that of her father’s, Patty says that George Jr. never made the hours they spent in the store as kids feel like work. “He never got upset…he just trusted us,” she says. “Danny does the same.”

Every inch of the shop is used. Sixty-two years worth of shoes, tools, dye containers, framed family photos and their grandfather’s antique equipment cram the shelves and surfaces. While the store itself may not have changed too drastically over the years, Dan and Patty recall a very different Wallingford.

When George Sr. moved his business into the neighborhood, I-5 wasn’t even a blueprint and there were seven shoe repair shops on 45th alone. Now, there are only 12 in all of Seattle. Wallingford was very blue collar and there were “definitely more taverns than coffee stands,” Dan says. He recalls the desegregation of area schools in the 70s, playing touch football in the middle of 45th with friends and cites Tweedy & Popp and Moon Temple as the only still-standing businesses from his childhood. 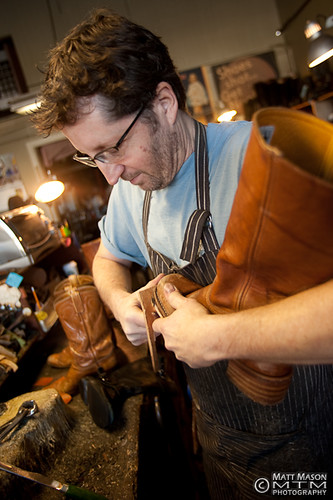 took on the business in 1990, there were twice as many shoe repair stores in the city, if not more. He attributes this decline partly to older generations closing up shop: “The guys get old and retire, and there’s nobody interested in taking over,” he says. Others are forced out by high rent. Luckily, George Sr. purchased their Wallingford property all those years ago. “We couldn’t afford it if we had to pay rent,” says Dan.

Despite the recession, 2009 marked one of Swanson’s best years to date. Over the Thanksgiving holiday, there was literally no space left in the store for more shoes, and they had to close just so they could hunker down and work. Some readers may recall an inquiry during that time, in regards to the store’s paper-covered windows.

Just like the generations before them, both Dan and Patty’s children have worked in the store growing up. Dan figures the business will end with his retirement, though. “I don’t see my kids taking it over,” he says. “Our plan was always sending them to college and letting them go further than I did in education.”

Dan estimates that by the time he retires, the shop will be about 100 years old and is contented to have taken part in continuing his family’s tradition. “It’ll have been a pretty good run,” he says.